- October 31, 2009 No comments:
Email ThisBlogThis!Share to TwitterShare to FacebookShare to Pinterest
Labels: Quotables

Friend: Umm, you have time for that?

English Patient Sister Y: Oh my gosh, what do you mean? You don’t have time to read the Bible?

Friend: (pause) Do you mean Romans?

Part of This: Pastor Ed Kang

I know that many of us at Gracepoint Berkeley and Gracepoint Davis have been enjoying our Sierra Lodge. This video was made by Pastor Ed Kang just a few years back as a promo video to have brothers volunteer to build our Lodge.

During a hangout time at NL, Brother E and Brother K bumped into each other…

Brother E: Hey! We haven’t played basketball in a long time, we need to play!

Brother K: Oh, sure! I’m down to play anytime!

E: You better watch out though. I’m ranking myself in the Top 5.

K: Wow.. what do you mean? Like Top 5 at the point guard position?

E: No.. Top 5 in overall raw talent! I’m pretty much playing the best basketball of my life right now.

K: Oh wow…that’s quite a statement… what happens if someone plays you and beats you? Does that mean you’re not in the Top 5?

K: (in disbelief) Wow, you must be really, really good.

About a month later, after morning prayer band at NL where most people left and just a few brothers hanging out in the foyer…

E: HEY, We need to settle this right now. I’m playing the best basketball of my life right now and I can’t waste my top 5 talent!

E: Let’s go! I’m tired of you making excuses! We need to play one on one right now!

Brother E and Brother K played 1 on 1. After E shot the ball for takeout and missed, Brother E never regained possession of the ball as he fell quickly 7-0. It was a fast though agonizing game due to the lopsided score for Brother E, but Brother E could not accept his defeat. Convinced that the outcome was a fluke, E demanded to play a best of 3 series to prove his claim as “Top 5 of Gracepoint”.. In a lose-lose situation of not wanting to completely destroy Brother E’s self-esteem and also fearing the possibility of losing to E, K reluctantly agreed to play another game of 1 on 1. The game ended with the exact same score, 7-0, and not in the favor of Brother E.

EC: Just letting you know, if I had beaten you, I wouldn’t tell anyone about it.

Friend: What was that language that Hawaiians speak?

Brother Rick: It's pidgin. I know how to speak it.

Joys of Teaching Meets English Patient: You're It.

Setting the Scene: Ms. L is an English Patient, now teaching an English Class. She was teaching descriptive writing to her students. The class brainstormed ways to be descriptive, one of the ways being avoiding words like "it," "thing," "interesting," "nice," etc...

While doing a writing conference with her students, she noticed that one student repeatedly used the word "It" in his essay about playing tag with his mom.

A paraphrased excerpt: "When I was playing tag with my mom, I was it."

Ms. L: Remember, how we talked about descriptive language?

Ms. L: What you've written is great so far, but I'd like you to go back to your desk and think a little bit more about what "it" is so that you can make your language more descriptive, ok?

Epilogue: A few weeks later, while on yard duty, Ms. L heard a bunch of students playing tag during recess. She finally understood what "it" is.
- October 21, 2009 No comments:
Email ThisBlogThis!Share to TwitterShare to FacebookShare to Pinterest
Labels: Story

Please provide a caption for this picture taken at a Sunday Worship Service at Gracepoint Berkeley. Note: I heard that Sue, the wife/mother of the 3 brothers featured here, was the one who picked out the clothes for the men of the house that morning. 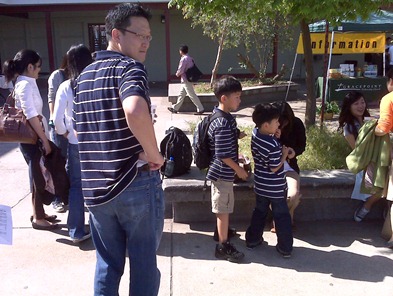 Friend: “Gosh, thanks to disgracepoint, whatever you say gets used over and over again to make a lot of people laugh.”

English Patient G: “I know… They want to juice it for everything.”

Pun With Gracepoint: I have a hard time believing my eyes

Setting: At the Ft. Worth stockyards, where they have a 'cattle drive' twice a day. But the actual count of heads of cattle was quite underwhelming...

John: Hey, what did y'all think of those longhorn cattle?

Judge: There were so few cows, it was unbullievable..

I know that we were staying away from puns for a while, but I thought I should post this one, because this incident illustrates a different point.. the fact that the puns of Gracepoint Austin seems to have a contagious quality -- like the Plague.
- October 15, 2009 3 comments:
Email ThisBlogThis!Share to TwitterShare to FacebookShare to Pinterest
Labels: Quotables

This is a video of Joe Song, playing the cool narrator role. Notice how much he shakes as he lifts up the rose. That rose died shortly afterwards.

Student 1: Ms. K, can you explain how few, several, and couple are different?

Ms. K: Sure. It's kind of tricky, but let's see. "Couple" has to do with two. "Few" and "Several" are usually more than two, but not too many. See what I mean by tricky?

Student 1: Oh, I get it. That's why when I go to Jack in the Box and order two drinks, the lady asks me, "Do you want a couple-der with that?"
- October 11, 2009 1 comment:
Email ThisBlogThis!Share to TwitterShare to FacebookShare to Pinterest
Labels: Quotables

After the previously mentioned China-vs-Taiwan conversation between Sister Y and Brother J...


Sarah: Sister Y, I heard that you didn’t apply for US citizenship yet! Is it because you’re pro-Chinese?


Sister Y: No, it has nothing to do with that.


Sarah: Well, it’s true that China is going to be the next superpower.


Sister Y: But they will never take over the world.


Sister Y: Because they don’t have the power of God.


Sarah: But if they did have the power of God, then they will take over the world?


Sister Y: Yeah, that’s why we have to send more missionaries to China.
- October 09, 2009 4 comments:
Email ThisBlogThis!Share to TwitterShare to FacebookShare to Pinterest
Labels: Story

Brother J: No, China is Taiwan. Taiwan is the real China.

Sister Y: What? Taiwan is just a part of China!

Brother J: Well, you guys in China got help from Russia, evil Stalin.

Sister Y: Oh yeah? You guys got help from the United States, those capitalists.

(By the way, this happened during our 4th of July outing)

This is a sound clip made by Greg Davis, featuring Phil, who is the guitar player.. Listen for the awesome electric guitar skills.

p.s.: Phil is actually a very good guitar player. These instances are situations where something went horribly awry.. but I guess that is obvious.
- October 05, 2009 12 comments:
Email ThisBlogThis!Share to TwitterShare to FacebookShare to Pinterest
Labels: Videos

This is an example of how the bus rides were like in Honduras (a mission trip that 10 Berkeley Gracepoint - ers went on this summer). Notice the featured car is trying to squeeze in between two giant buses.

Setting: A 4-year old child, J, was talking to her dad on Sunday afternoon about why she still had the money he gave her as her offering money.

Dad: How come you still have the money?

J: Because I didn’t give offering.

J: Because… the offering bag was full.