It’s been a while that John Korea has been the face of disgracepoint (on our home page banner).  And we wanted to see if you had a picture that you would like to submit as a possible banner.  It doesn’t have to be a personal picture of someone from our church.  It can be a scenery, it can be a sinking ship, a hog-dogging skier who is messing up, etc..  One request for this picture would be that it can be seen in a very thin dimension, as you can see from above.

If you have something like this, please email it to me or Roy Lo.

- June 30, 2009 9 comments:
Email ThisBlogThis!Share to TwitterShare to FacebookShare to Pinterest
Labels: Other

Setting: At the 'Celebrate Freedom' Christian concert in Dallas, TX. In between bands, members of 'Medieval Times' took to the stage with a display of medieval fighting, wielding implements of war such as axes, swords, and maces.

Setting: watching a men's volleyball game during the Olympics

English Patient W: No. I think there’s another word that means “sportsmanship”, but it starts with the letter “P”. Isn’t there a word like that?

English Patient W: Really! There is such a word! Hey, sister E! Isn’t there a word that starts with “P”, but means sportsmanship?

English Patient E: No, not that I can think of, but it’s okay. I can kind of see your confusion. Penmanship kind of sounds like a real word.

Pun With Gracepoint: It's the Real Thing

David: Now we'll be going from 'mono' to 'stereo' - that means TWO people you have to pay attention to each time.
Student: Woah! That sounds hard!
David: I'm sure you can handle it - and it's much more fun.
Pundit: Definitely. It's stereo way to play.
- June 28, 2009 8 comments:
Email ThisBlogThis!Share to TwitterShare to FacebookShare to Pinterest
Labels: pun

This is a video posted at: http://sfsukoinonia.wordpress.com/, commemorating brother Gary as he goes to serve at Gracepoint Hsinchu.

Apologies to our loyal readers for our short time away. Hope you don't hiatus for it. Never fear, however; 'Pun With Gracepoint' will be syndicated every other day, alternating with 'Dis-Gracepoint' posts.

On to our regular programming!


At a Japanese sushi buffet, P. Manny contemplates eating his first oyster-on-the-half-shell. The brothers were excited cheering him on.

DL: I don't know if he's going to do it...
Henry: He's missing out though, so sad!
Pundit: I guess we'll just have to see if he shell eat it.
- June 26, 2009 7 comments:
Email ThisBlogThis!Share to TwitterShare to FacebookShare to Pinterest
Labels: pun

English Patient: Hey are you okay? You look beat up!

Normal vs. Tim So

This is a video that the junior brothers of a2f Gold made for Tim So, before he left for Taiwan to serve there for 1 year.

Boss: Hi, how's it going? I need to talk to about something.

Boss: Can you take a hike?

Boss: Can you walk over to T Hall and get a document for me?

A Picture Worth One Word: Hurting

This happened a couple of months ago in Gracepoint Austin. Please don't click on the picture to get a closer look at who the driver was. How many Gracepointers does it take to drive a truck into a ditch? Nine. One to drive, and eight to look at him and shake their heads. 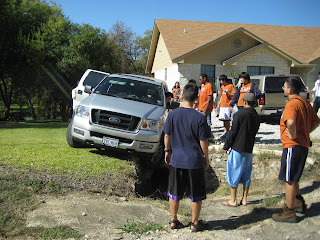 Context: Ms. K's class. Having a discussion of Shakespeare's Othello. Finished a scene, during which the protagonist has an epileptic seizure.

Ms. K (thinking to herself...uh oh...): Uh...well, there's a neurological condition called epilepsy, and because of abnormal or irregular brain activity, a person can have seizures...

(Student 2 talking excitedly and in hushed tones to Student 3.)

Ms. K: Student 2, is everything all right? What's going on?

Student 2 (looking really worried): My cousin has epilepsy. I didn't know he had seizures and stuff. I just thought he had trouble reading because he saw letters backwards and switched around.

Ms. K (beat, stifling a giggle): I don't think you have to worry.
- June 19, 2009 1 comment:
Email ThisBlogThis!Share to TwitterShare to FacebookShare to Pinterest

Pun With Gracepoint: I loved it

Pastor Manny: Wow, that was neat! Those stingrays move so fast. Did you guys enjoy getting to touch the stingrays?
Pundit1: Yeah, it's so cool - I rub it!
Pundit2: I agree. It's fintastic.
- June 18, 2009 9 comments:
Email ThisBlogThis!Share to TwitterShare to FacebookShare to Pinterest
Labels: pun

A bunch of brothers were talking, and particular brother whose last name is Park said, “Do you know that when I was born, I was almost named Mark? That would have been pretty bad… Mark Park.”

The rest of the brothers started to giggle and chuckle, but English Patient Brother Y started to laugh really loud. He was laughing as if this was the funniest joke he’s ever heard, repeating the words, “Mark Park! Mark Park! That rhymes!! That would have been so bad! Ha ha ha ha!” Other brothers didn’t think it was that funny, but it seemed that Brother Y found it hilarious that someone would have had a rhyming name.

Then something dawned on one of the brothers, and he asked Brother Y, “Wait a minute! What’s your full name?”

Pun With Gracepoint: You "should" sea this

Thank you, Dis-Gracepoint, for hosting Pun With Gracepoint at this site! We are honored and look forward to many years of humor together. Here's to the many laughs we will one day look back upun.

Today I have the pleasure of introducing the first of what will hopefully be a regular addition to Pun With Gracepoint - 'Picture Punfect'! A photo of a pun-ny situation, or a pic of a great pun somewhere out in the world.
And we are honored to have one of our greatest fans grace the frame alongside our first 'Picture Punfect' entry - Pastor Manny! (he says he doesn't like our puns so as not to let our heads get too big, but we know that he just loves our puns. that's why he shakes his head and lets out a loud sigh everytime he hears one. yeah!)

Without further ado:
- Our recent trip to Corpus Christi was a very fruitful one for puns. We'll be sharing more of them over the next few days, but here is a puntastic pun we found at the Texas State Aquarium, near the otter pund: 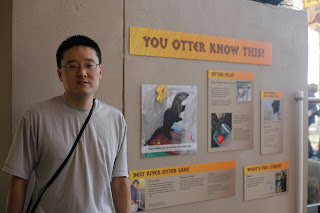 I know P. Manny doesn't look too enthused, but I'm confident that inside he is brimming with joy! And we all know how happy he must be that his two favorite websites have now merged into one!! Yay!

During these tough economic times, sometimes we need to cut our costs and merge businesses that overlap in their core products. We have come to know of a site called "punwithgracepoint" (http://punwithgracepoint.blogspot.com/), which has been trying to impose their own brand of humor (word puns) to the rest of us.

Some people found the word puns to be hilarious, but I can tell you now: None of the English Patients found that site to be funny at all. In fact, they hardly found it understandable. How would you like it if your friends told you, "Oh my, check out this site... it's so funny! But it's written in a foreign language that you don't understand." No, you wouldn't like that at all.

So for the sake of Sister G's and Brother Y's among us, disgracepoint has decided to do a friendly merger with punwithgracepoint writers, who are from Gracepoint Austin. So from now on, these anti-English Patient writers will write into disgracepoint. So let's welcome them, despite their formerly exclusive form of humor. And I want to encourage all of us to comment on their word pun humor, especially the English Patients among us...
- June 16, 2009 4 comments:
Email ThisBlogThis!Share to TwitterShare to FacebookShare to Pinterest
Labels: Other

During our Gracepoint Live practices, sophomore English patient D decides that he wants to try playing the role of the ship captain.

Friend J: Which direction shall we sail, captain?

Setting: During the years when there was a scare about the mad cow disease, a particular English Patient Sister H kept to a very strict diet of not eating any beef.

Friend: Wow, it's amazing that you're not eating any beef. What do you eat instead?

English Patient H: Hamburger.. because it's made out of ham.

- June 11, 2009 No comments:
Email ThisBlogThis!Share to TwitterShare to FacebookShare to Pinterest
Labels: Videos

Brother K: Who's there

A certain brother D, in introducing a book written by the guest speaker, says, "And this is a book that's disgusting.. I mean discussing various issues."

A humorous video made by the graduating seniors about GLive 2009...

Setting: People are discussing where they are going to be sleeping over when they go to So-Cal for the upcoming Gracepoint College Department Magic Mountain Trip...

English Patient: So where are you guys all staying? I was wondering if I could crush into someone's house.
- June 03, 2009 4 comments:
Email ThisBlogThis!Share to TwitterShare to FacebookShare to Pinterest
Labels: Quotables

This was a video that was shown during Richard Tjhen's wedding reception.