Recently, Sarah my wife was trying to put my daughter Michelle, now at age 5, to sleep.
Michelle kept on saying, "I'm tired... I'm so tired."

So Sarah told her, "Michelle, stop saying that. If you keep saying that, you are going to feel more tired."

Sarah raised her voice and sternly said, "Michelle! I told you not to say that! Why are you saying it even more?"

Michelle replied, "But I want to get more tired, so that I can go to sleep."
- September 27, 2009 3 comments:
Email ThisBlogThis!Share to TwitterShare to FacebookShare to Pinterest
Labels: Quotables

Setting: A particular Sister S from Gracepoint Austin used to work at a place where she had to make a lot of phone calls. Once, when Sister S was making a phone call, she got an answering machine, and this is what she said:

“Hi, this is S. Just wanted to remind you that when you get the document, please remember to sign off on it. Please let me know if you have any questions, and please give whatever feedback you want to. In Jesus’ name I pray.” [click] 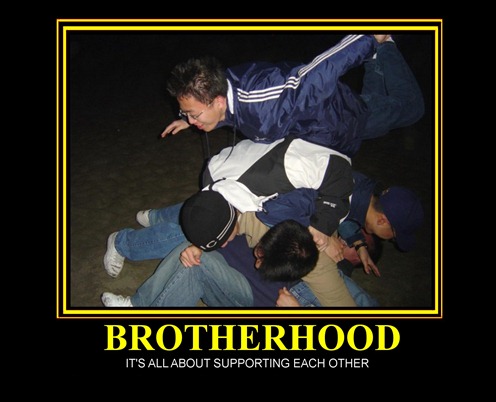 The predominant response of people who have seen this picture of Jasper wearing a bullfighter outfit has been, “Why, why why??” In response, Jasper keeps on saying that that picture was from his high school days in Taiwan… as if that answers the question. 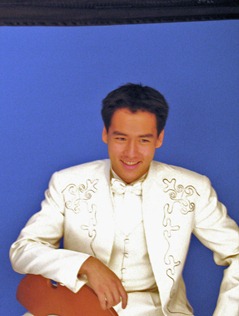 This English Patient is known as Sister M, who was formerly Sister G.

Friend 1: Wow, Friend 2, how's your husband's back? Did he hurt his back playing the guitar and stomping his foot too hard?

Friend 2: No, he hurt it lifting stuff at the Element Yard Sale.

Friend 3: Oh no, the Element brother staff are taking turns hurting their backs.

Sister M: Hey, Friend 1, you should be careful. First Kenny, now James...so many people are throwing up their backs these days.

Sister M: ...What? I said something that will be on Dis-Gracepoint, didn't I?

Friend 3: Oh no, we wouldn't do that to you.
- September 19, 2009 5 comments:
Email ThisBlogThis!Share to TwitterShare to FacebookShare to Pinterest
Labels: Quotables

Brother K, whose last name happens to be Choi, abruptly stopped and said indignantly, "Hey! Who you calling a fat Choi!"

Brother J: Diana, are you half-Korean?

Diana: [pause] What??? Is it because my last name is Correa?

English Patient: The Meaning of Hay

This is a story of 2 English Patients, Brother S and Brother Y.

But upon the 7-year-old’s insistence, Brother S relented and started to read the book. Then his fears came to fruition.. He ran into the word that he didn’t know. H-A-Y

He kept on reading, hoping that Jonathan will not ask him about the definition of that mysterious word. Thankfully, he didn’t ask Brother S what “hay” was, so Brother S survived through the reading without a glitch.

Brother Y confidently replied, “Oh yeah.. HAY is the past tense of HEY. Like I hay him yesterday.”

Please provide a caption for this picture of a dog pile... 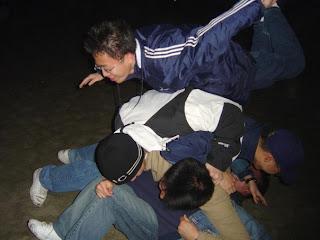 ”Please pay me for the attached bill, or else I’ll haunt you down.”

Someone thought that maybe he made a spelling error, but when asked, brother J revealed the fact that he thought that was the right meaning… That he would haunt you down like Casper.

Sister S, who is among us today, had a younger sister whom we shall call "SY". As she was growing up Sister S liked to play tricks on her younger sister SY, so one day, Sister S got her dad's clear plastic office chair mats under his rolling office chairs. Then she placed the mats at the various doorways throughout the house, placing them upside down, so that the pointy spikes that stabilize the mats onto the carpet were now exposed, facing up.

Sister SY, thinking that there was something very wrong, ran toward the voice of Sister S, who happened to be all the way at the other end of the house.

Whenever she went through the doorway, she would step on the pointy ends and cry out, "Ow ow ow!!" But because of the adrenaline rush, sister SY just kept on running toward Sister S.

When SY got there, she found Sister S rolling on the ground laughing.

- September 05, 2009 No comments:
Email ThisBlogThis!Share to TwitterShare to FacebookShare to Pinterest
Labels: Quotables

During his junior high days, Brother E, who is color-blind, saw that everyone was carrying a cool-looking black bag. He wanted to be "with it", so he went out to the department store, found the same bag and bought it. He proudly carried around the bag at school for a while, until one day someone came up to him and said, "Hey, why are you carrying around a purple bag?"