Just wanted to highlight an old disgracepoint video... Because some things deserve to be mocked twice.

Brother M of Gracepoint SF Chapel was found in the kitchen with his head down, looking quite sour and slightly upset with an empty cup in his hand.

“I thought this was apple juice!” Brother M exclaimed, as he lifted up the plastic jug of olive oil.

This is the same brother M who had another incident involving a toothpaste which was featured in a previous post here.

There is a particular English Patient Brother JN among us, who was feeling unnecessarily stressed out about studying. So when his peer brothers organized a peer road trip, he planned on taking his books with him so that he can study. His peer brothers balked at the idea and told him, “No textbooks on this trip!” And they threatened brother JN with physical harm if he were to bring any textbooks on the trip.

So Brother JN decided that he would get around this rule by recording himself reading the textbook, and then listen to the mp3 on the road. That way, he could get his studying done, AND he won’t even get carsick.

When the road trip started, Brother JN turned on his mp3 player and started listening to himself reading. While he listened, he had a particular expression on his face, like he’s really concentrating. After about 30 minutes of this, Brother JN angrily took off his headset and exclaimed, “Man! I can’t understand myself!”

Hurting: The Most Memorable LIFE Group

Near the end of the semester, our freshmen LIFE group (Gracepoint's small group) went up to a park up Euclid to have our final LIFE group meeting. There is a very fun concrete slide up there, next to the playground. Some of the brothers were on the swings, trying to jump off the swing and seeing who can go the furthest, etc.

Staff brother J, who was also there, was swaying lightly on the swing – and from the looks of his leg motions, it was obvious that he didn’t really play on the swings much when he was a child. He just sat there barely swinging, trying unsuccessfully to fit into the scene.

Afterwards, we ran up the hill and had our final sharing time. During the sharing time, Brother J said, “Umm… I just wanted to warn you.. I feel like throwing up.”

To make a long story short, basically, brother J almost threw up during our final prayer. We all asked if he was okay, and he kept on saying, “yeah, I’m okay, I’m okay. Just pray.” But as soon as we tried to pray, brother J would make these throwing-up noises, while at the same time telling us that he’s fine, and that we should just pray.

When asked why he felt like throwing up, brother J said, “I think it was the swings.”

A particular English Patient among Gracepoint was once heard saying, “You know, when we are listening to someone share their problems, we should listen and first try to be apathetic.”

- August 23, 2009 No comments:
Email ThisBlogThis!Share to TwitterShare to FacebookShare to Pinterest
Labels: Quotables

There is a particular Sister S among us, whose had a younger sister that we will call Sister SY. Sister S and SYwere playing with their newly acquired helium balloons in their backyard when Sister S lost grip on her balloon, and she watched helplessly as her balloon floated away into the sky. After looking sadly up into the sky for a while, Sister S looked at SYballoon, then approached SY.

Crying, SY let go of her balloon and released it into the air. She stared at the sky in bewilderment as Sister S went back inside the house, feeling a little bit better about her own lost balloon.

Setting: Brother T was playing sports and dislocated his index finger. He was rushed to the hospital where a triage nurse saw him. 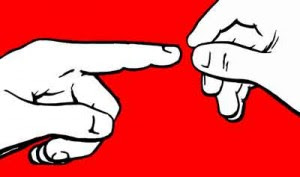 Nurse: Okay, your finger is dislocated.. so I'm going to try to pull your finger back into place.

Brother T: Okay.. [sticks out his finger toward her]

[Nurse pulls, and brother T, blinded by the flash of pain that hit him, loses control and...]

The above story demonstrates that sometimes "pull my finger" is no joke.

Setting: Walking about the downtown area, a trolley is spotted.

Sister: Wow, Austin has trolleys! I didn't know that, neat!
Pundit: Actually, they don't run on an electric rail - they just have tires, like a bus.
Sister: Oh, so they're not trolleys? Really?
Pundit: Yes, wheely.
- August 18, 2009 4 comments:
Email ThisBlogThis!Share to TwitterShare to FacebookShare to Pinterest
Labels: pun

Here's a video of our Element Youth students on their way down to L.A. for their Magic Mountain trip.

This is the video response of the students.

This TC act won the award: "The most blatant use of TC to relive his glory days"

Actually, many people were kind of confused by this portion of the act, wondering, "So... the Pharoah won?" This was the first time that a breakdance routine caused some theological problems. But a2f clarified and said that the final move that the Pharaoh character did was a "death" move.

Pun With Gracepoint: Utah is Awesome

Another edition of our 'Picture Punfect' series...

Found on the t-shirt of one of our grad students, this pun needs no words: 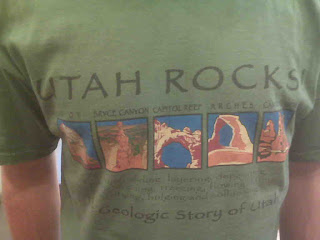 Since the beginning of disgracepoint in April 2008, there have been many posts that have since gone into the depths of our archives. And I thought that it would be nice to highlight some classic disgracepoint submissions once in a while, because there are some things that deserve to be laughed at twice.

Take a look at the following Dis-Gracepoint Classic by clicking on the link below:

- August 13, 2009 No comments:
Email ThisBlogThis!Share to TwitterShare to FacebookShare to Pinterest
Labels: Videos

A certain brother, in teaching his class about the epistles of the New Testament, explains, "The epistles are letters like Romans, Ephesians, Galatians.. they were the letters that were flirting around the early church."
- August 11, 2009 2 comments:
Email ThisBlogThis!Share to TwitterShare to FacebookShare to Pinterest
Labels: Quotables

Pun With Gracepoint: Choose the right one

Setting: Bryan is looking for the phone number of a Korean restaurant. David finds the number and gives it to him.

David: Alright Bryan, yeah, that's the number for Chosun Galbi. Hope the soup there is pretty tasty! (David hangs up)

David: Shoot! I didn't realize there were two numbers for Chosun Galbi. I'm not sure which location he wanted...

Pundit: Yeah. I hope you have Chosun the right one.
- August 10, 2009 4 comments:
Email ThisBlogThis!Share to TwitterShare to FacebookShare to Pinterest
Labels: pun

Joys of Teaching: P.E. sure has changed!

Context: The vocabulary word is abhor.

Student's illustrative vocabulary sentence: I abhor P.E. class because I hate to exorcise.

* Ms. K does not recommend giving sarcastic feedback to student work, but given the rapport she had already established with the above student, she knew this would not crush his spirit.
- August 09, 2009 1 comment:
Email ThisBlogThis!Share to TwitterShare to FacebookShare to Pinterest
Labels: Story

Please provide your captions for the following picture 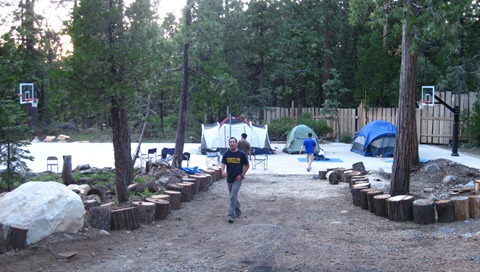 English Patient: “This is soooo hot! I’m sweating like a cat!”

- August 05, 2009 No comments:
Email ThisBlogThis!Share to TwitterShare to FacebookShare to Pinterest
Labels: Quotables

Setting: During brainstorming for activity ideas, someone threw out the suggestion to go ice-skating.

This video was once taken down because too many people complained of post-traumatic syndrome upon viewing this video. But due to popular demand, we are publishing it again. This skit is known as the worst Gracepoint Thanksgiving Celebration performance ever.

Pun With Gracepoint: Don't want to miss out

Setting: At the Ft. Worth 'Stockyards,' walking around in the 105+ degree weather proved draining, until some brothers found a relief station set up near the museum, with a large industrial fan that had an integrated fine water mist spray system, providing much relief.

Pundit: Come on, that must be just a gimmick. Your glasses are just getting wet. How cool could it make you feel?
Wayne: No, really, come on and try it! It really works! Evaporation or something.
After Pundit tries the mist fan for himself...
Pundit: Wow. You're right. It's very refreshing. Good thing you told me to try it for myself - I almost mist it.
- August 02, 2009 1 comment:
Email ThisBlogThis!Share to TwitterShare to FacebookShare to Pinterest
Labels: pun

Below is a transcript of a Google chat between Tim and Brother J: