A few years back, I took on the task to deliver some publications to a pastor in San Francisco. Because of the nature of the material being delivered, I decided that I should dress up for this, and I decided to go all the way and wear a full suit and tie. 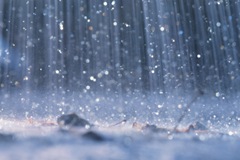 There happened to be a storm front coming into the Bay Area during that time, so it was pouring hard. I'm talking about the kind of downpour where you could have your windshield wipers at the highest speed and still not get a clear view. But I had brought with me a trench coat and a big umbrella, so I was ready.

As I was passing through the Bay Bridge toll area in my Corolla, I was careful not to open the driver-side window until I was safely under the toll area awning, covering me from the violent downpour. I gave my toll fee to the attendant, and as I slowly moved forward, I pressed the "up" button on my car.

That's when I realized what my wife had forgotten to tell me. She forgot to tell me that this car had been experiencing problems with the driver-side window motor. It goes down just fine. But somehow, when you try to bring the window back up, the motor gets stuck and it takes a few minutes of struggling with the button to finally bring the window all the way up. Many times, the window simply refuses to respond for 10-20 minutes.

By the time I realized what was happening, I was already beyond the safety of the awning and rain was pouring into the car through the open window. And I am on the bridge. There's no place to hide. I have to keep moving, I can't even stop and get my trench coat out of the trunk. The hard downpour was hitting my face and going all over my lap. I tried to lean to the right as much as possible, but it was no use; even the water being splashed sideways from the adjacent cars passing by were coming into my car, hitting my face directly with significant force. If I passed by a big Mack truck, the water splashing from its tires would hit me so overwhelmingly that I had to breathe through my mouth to just stay alive - it was like swimming. Throughout the whole time, I kept on pressing the button repeatedly, hoping in vain that somehow the window would go up. I don't think I ever screamed alone for that long.

By the time I got to my destination, I had managed to get the window closed. But that was 15 minutes later. As I stepped out of the car, I looked at myself. I was completely soaked -- but only on my left side. My left pant leg was completely drenched, my suit's left arm was soaked, as was the left side of my face. I thought maybe I should just stay out without an umbrella and let my entire body soak in the rain. At least that way, I don't have to explain why in the world only my left side was soaked like that. But I thought better of it and just went into meet the pastor with my trench coat on, hoping that it would disguise the fact that I looked like I was baptized by immersion only on my left side.

I don't think he noticed. He just looked at me and commented, "It's raining pretty hard, huh?" I tried to see if there's any note of ridicule in his voice, but I didn't detect any. So I just said, "Yes, it's raining hard," and I just followed him to his office. But I realized that there's another problem. The more I walked around, the more all the water from my left side started to find its way down to my left pant leg and down to my left shoe. It was hard to disguise my condition when only my left shoe was dripping wet, leaving a one-footed footprint wherever I walked. We got to his office, I gave him the publication, and we chatted for a bit. I got out of there as quickly as possible, before the puddle forming around my left shoe got too big.

So the lesson of this story is that you need to make sure that your automatic windows work properly before you cross the bridge. I was thankful that there was no toll gate coming across the bridge from the other direction.

Oh man, this is hilarious!!!!!! :-P I feel you though, Daniel... a long time ago when my umbrella didn't open automatically in the pouring rain. Hope you didn't get too sick.

This is the funniest story I have read in AGES! I remember hearing the story from you, but just reading about it now and imagining, it made me cry, everyone at work things I am weird... this great!

Upon reading this during my break, I had to contain my laughter because I share an office with someone.

I'm glad that I will never encounter this problem with my 1990 Toyota Camry. Not only can I roll down the window without the ignition on, I have automatic seat belts.

This was sooooo funny! I love the part about how you were "leaving a one-footed footprint wherever I walked." LOL!