In 2007, when we were building our Sierra Lodge, we had some wasp problems...  Here's a picture of one of the biggest wasp nests that we've seen, and below is the video of how John Ko and Tony Sun took care of that. 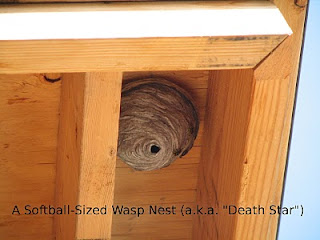 Note: Some brothers mocked John Ko for running away from the fallen Death Star like a little cry-baby.  We could not reach John Ko for comments.  However, there were brothers (not shown in the video) who were actually in the house, who were so afraid that they ran away to the other side of the building, even though they were inside the house.  After this video came out, Pastor Ed Kang started to tell the brothers that they were being little cry-babies and claimed that he could crush those wasps nests with his hammer, right in front of his face.  The next time we went up to the Sierra Lodge with Pastor Ed, I challenged him to actually do it, and to my amazement, he actually did it even with wasps circling around him!  It turned out to be a good story, because he didn't get eaten up by the angry wasps, otherwise this story would be quite different.

I wonder if facing wasps is one of those things that Apostle Paul refers to when he wrote that he was exposed to death again and again.

if i ever need to explain the phrase "weak-sauce" to someone, i'm showing this video

At least, John was brave enough to actually take the thing down. Kudos for john....

I've not seen John Ko run so fast in a long time.