Setting: James, one of the brothers of Gracepoint, was the favorite uncle of Elise (who was 3-years-old back then). He was trying to put her to sleep by reading her a story, and as she was falling asleep, James took off his glasses. 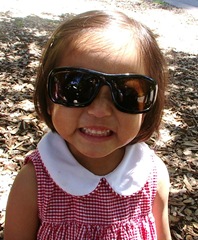 James: They're right there.

James: Because I took them off.

Elise: Uncle James, can you wear your glasses?

oh the honesty of kids!